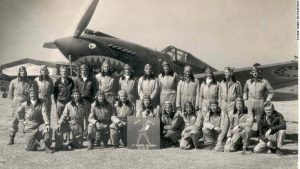 By Secretary of the Air Force Public Affairs

Frank Losonsky, who joined the First American Volunteer Group in May 1941, passed away from natural causes at the age of 99.

“Individuals like Frank Losonsky exemplify our core values,” said Air Force Chief of Staff Gen. David L. Goldfein. “Frank was one of the youngest of this group of 311 young Americans who journeyed to Burma in 1941 to help defend freedom. His efforts, along with all of those who flew with the Flying Tigers, will continue to inspire future generations of American Airmen. What a grand life he led – he will be truly missed. ”

Originally from Detroit, Losonsky, served as a crew chief maintaining the legendary P-40 Tomahawk stylized with an intimidating shark mouth livery made famous by the AVG.

The AVG, nicknamed the Flying Tigers, initially consisted of 311 members who were tasked with protecting China from the Japanese forces. Structured similarly to the Eagle Squadrons in the Royal Air Force who fought during the Battle of Britain, the Flying Tigers were organized within the Chinese air force and flew under the Republic of China flag.

Originally deploying to Burma in the summer of 1941, the Flying Tigers didn’t officially begin combat operations until December of 1941.

In an effort to expedite China’s surrender, the Japanese air force conducted massive area bombings against cities throughout China. Arriving shortly after a Japanese bombing mission on December 19, the Flying Tigers were taken to the city to witness the devastation. Vowing to protect the citizens of Kunming, the Flying Tigers responded to the following day’s bombing run in full force as nine of 10 attacking Japanese bombers failed to return to their base.

“The Japanese referred to them as ‘gangsters’ because they said they didn’t fight fair,” said Tripp Alyn, chair of the Historical & Museums Committee AVG Flying Tigers Association. “The Flying Tigers, though they were characterized by some as mercenaries or soldiers of fortune, were largely patriotic American officers who joined a covert operation to help keep China in the war.”

Although existing for only a year, the Flying Tigers produced 20 aces, and destroyed 297 enemy aircraft at a ratio of 20-to-1, with 92 Japanese airmen killed for every Flying Tiger lost.

“The Flying Tigers were instrumental in delaying Japan from capitalizing on regional natural resources,” Alyn said. “Their effort not only delayed Japan but it was vital to U.S. strategy of bogging down the Japanese army on the Chinese mainland.”

On July 4, 1942, the AVG was disbanded and their mission was absorbed into the United States Army Air Forces. Although disbanded, their proud legacy remained active through the war and unto today where their heritage is actively carried by the Air Force’s 23rd Fighter Group, nicknamed the Flying Tigers.

Like many Americans who came home from the war, members of the AVG re-entered civilian life, went to school, built businesses and started families. Many AVG did continue their military service and retired after distinguished military careers. Most notably David Lee “Tex” Hill who retired as Brig. Gen. in the Texas Air National Guard.

In the almost 80 years since their disbandment, the Flying Tigers have remained icons of American aviation culture. Their famous P-40 Tomahawk continues to be seen in toy stores worldwide, their vibrant blood chit has made its way into the fashion industry, and 23rd Fighter Group displays their iconic shark mouth livery on their A-10 Thunderbolt IIs.

To learn more about MASH Hemp and our mission to help lower the suicide rate of Veterans and 1st Responders go to https://mashhemp.com/

Please email sherm@mashhemp.com Tell us your story
and share with others your experience.

We thank you for your service!